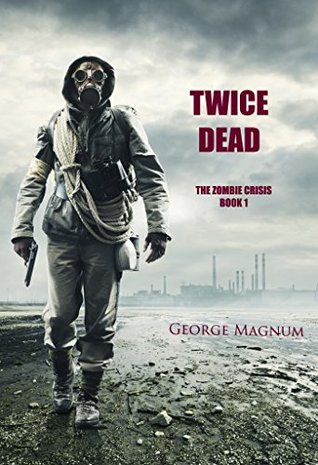 Summary:
“Within forty eight hours, it had become a global pandemic. There was no explanation. The dead were rising, returning to life, and devouring the living. Commander Peterson, leader of the most elite fighting unit in the U.S. armed forces, was assigned one, last final mission.

In his worst nightmares he never could have imagined this apocalypse, or that he and his team were to become the one last hope that remained….”

I love zombie novels. Even if people are reusing ideas from other novels or movies, it’s still great to read people’s creativity.

This novel had a little too much military jargon but hey, every night I pop off heads of zombies in Killing Floor (however I’ve never killed any floors yet) so some of it I do get.

After the initial first part of the novel, because creepy kids, it turned into the beginning of the original Predator or even Aliens where each person had some kind of kick ass ability or were borderline psychotic but somehow worked in the team.
As time went on, the borderline psychotic became full blown psychotic. That was a little terrifying. It was kind of like watching a rabid clown with a sharp knife. Every kid’s nightmare there.

I think one of the biggest flaws in the book was the fact that the team had never really worked together before. They were launched into a world catastrophe of epic proportions and they didn’t have the strength to really keep things together. A lot of the team ended up dying because they didn’t know how to work together. Also, some of the team members made some serious rookie mistakes. In no way would those people be considered “the pros”. They’d get a group of regular people killed instantly. Maybe it was a good thing a few members had some rather quick deaths.

Anyways, a few qualms there but really, it was a great story. I was completely into it and it was tough to put down, especially when they were trying to help the townsfolk.

I’m looking forward to trying to continue on with this book series and see where Peterson and what is left of the team go. That cliff hanger though!

Where to Buy:
Amazon CAN | Amazon US | Barnes & Noble | Kobo

One thought on “Twice Dead by George Magnum”