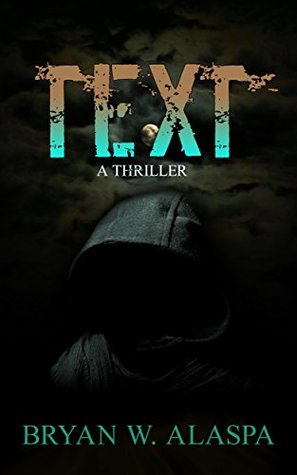 **A TERRIFYING NOVEL OF UNRELENTING SUSPENSE FROM AUTHOR BRYAN ALASPA**

Abe Yates is a successful true crime author. He makes a living writing about the crimes and deaths of others, but that living has allowed him to provide a great house and life for his wife and two kids. His latest novel is about a vicious hit-man and serial killer known as The Saint. It is already destined to become a runaway bestseller with a movie option at the ready. Life is good.

Until the morning he reaches for his cell phone and finds a mysterious video text. A text that shows something horrific. A video that appears to show something that hasn’t happened yet.

Now Abe and his family may only have days to figure out who created this video and who wants to do them harm. How far would you go to protect your family? For Abe, he may find that his own desire to protect his life and his home may take him to darker areas in his own heart than he ever thought possible.

A tight-knit supernatural thriller from the author of RIG, Gone, The Man From Taured, Sapphire and the Deklan Falls detective series comes an edge-of-your-seat look into terror and suspense – TEXT.

Sure enough, there were some texts from friends and people who knew Spencer and  whom Spencer had probably called about the party last night. Most of them Abe knew only  tangentially and he could not recall most of their faces and most of them expressed regret at not  being able to attend. He mused that they could have shown up or just not shown up and he  would never have known the difference. That was the thing that happened when you were a  reliable bestseller at the agency and publisher. People felt they had to bow down to you even if  you had no idea who they were.
Delete. Delete. Delete.
He came to a final message, near the bottom of the list, from a number that he did not  recognize. In fact, it was an impossible number to start with.
0000000000
Abe remembered getting weird phone calls from a number like that years ago when he  had first gotten a cell phone. They had finally come down in price and the phone companies  were finally offering decent deals on them and he had bought one of those obsolete flip phones.
He would find that he had a voicemail from a number that was all zeroes and when he listened  to it, it was just a bunch of weird noises. He hadn’t gotten a call like that in ages.
Abe opened up the message and saw that there was a black box in the middle of a  white field. There was a white arrow, pointing to the right, in the middle of the black box.
He frowned.
Who the hell would send him a video text? No one he knew was the type to do that.
Abe was not a video taker himself and he rarely even texted over photos. If he had a good  photo, he was told that social media was the best place to put that.
It was probably just someone who was at the party last night. Perhaps someone who  stayed later and maybe things got crazier after he and Shari had left. Hell, it was probably a  video from Sam or Spence trying to show him the fun he missed out on.
Abe hit play.
At first he was not sure at all what he was a looking at.
It was a weird video, shot poorly, that kept pixelating. It was dark and it was shot with  some night vision setting on the camera or cell phone, so everything had a weird greenish/white  glow. The colors were all inverted, too, so the black pants looked white. He saw legs and arms  and torsos, but the camera was mostly pointed at the ground.
There was sound, too. Men’s voices, from the sound of it, but the sound was tinny and Abe couldn’t make out any words. Someone was yelling.
Then there was screaming.
The camera swung up and suddenly Abe was looking into a face that he knew all too  well. Whoever was holding the camera was wearing a Henry the CrossEyed  Lion mask. One of  the cheap plastic ones that came out every year and sold at the large discount store around the  corner. The eyes, hidden behind that mask, looked empty and dark. There was just the smiling  lion and the areas around the eye holes had been painted to look comically crosseyed.
It was surreal.
Abe sat up straighter on his chair, absently licking his lips. He was distantly aware of  the fact that his throat was dry.
The camera swung around and now he could see that they were in someone’s house.
He could make out a large staircase and a hardwood floor. It was familiar. He could see at least  five other men. They were wearing suits, but all of them were wearing animal masks. Plastic  animal masks based on the characters in Shari’s books.

Bryan W. Alaspa is a Chicago born and bred author of both fiction and non-fiction works. He has been writing since he sat down at his mother’s electric typewriter back in the third grade and pounded out his first three-page short story. He spent time studying journalism and other forms of writing. He turned to writing as his full-time career in 2006 when he began writing freelance, online and began writing novels and books.
He is the author of over 30 books of both fiction and non-fiction and numerous short stories and articles.
Mr. Alaspa writes true crime, history, horror, thrillers, mysteries, detective stories and tales about the supernatural.