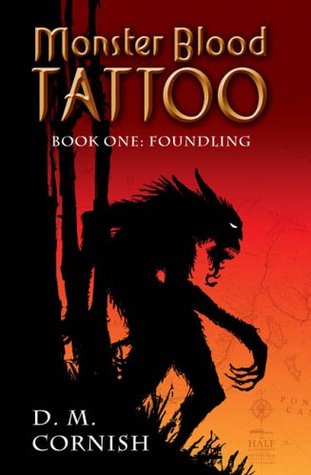 Set in the world of the Half-Continent—a land of tri-corner hats and flintlock pistols—the Monster Blood Tattoo trilogy is a world of predatory monsters, chemical potions and surgically altered people. Foundling begins the journey of Rossamund, a boy with a girl’s name, who is just about to begin a dangerous life in the service of the Emperor. What starts as a simple journey is threatened by encounters with monsters—and people, who may be worse. Learning who to trust and who to fear is neither easy nor without its perils, and Rossamund must choose his path carefully.

Complete with appendices, maps, illustrations, and a glossary, Monster Blood Tattoo grabs readers from the first sentence and immerses them in an entirely original fantasy world with its own language and lore.

Rossamund is a boy who is an orphan (or in the book’s term, a foundling). A young boy with an unfortunate name. The boys and girls in the orphanage, when they reach a certain age, were given a choice in career. Rossamund was chosen as a lamplighter for the army. Rossamund goes on an epic journey to reach his destination and his career.

I enjoyed that Rossamund was so innocent and easily distracted from his path, despite his obvious worry that he wouldn’t make it in time and/or lose his position. He managed to make friends and a few enemies along the way. It was a grand adventure with him.
I enjoyed the addition of Miss Europe. At first, I wasn’t sure if she was going to kill Rossamund. But she ended up being a mother figure to him.
That was a running theme. Each of the characters in the book became some sort of a parental figure, as much as they became a friend. They gave Rossamund the sense of family that he was missing.

I definitely recommend this novel for anyone looking for a unique story filled with monsters, steampunk themes, arcane magicks and science. This was a great novel and a wonderful find. 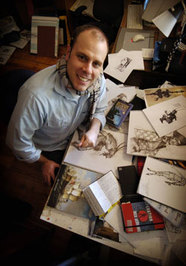 D.M. Cornish was born in time to see the first Star Wars movie. He was five. It made him realize that worlds beyond his own were possible, and he failed to eat his popcorn. Experiences with C.S. Lewis, and later J.R.R. Tolkien, completely convinced him that other worlds existed, and that writers had a key to these worlds. But words were not yet his earliest tools for storytelling. Drawings were.

He spent most of his childhood drawing, as well as most of his teenage and adult years as well. And by age eleven he had made his first book, called “Attack from Mars.” It featured Jupitans and lots and lots of drawings of space battles.

He studied illustration at the University of South Australia, where he began to compile a series of notebooks, beginning with #1 in 1993. He had read Mervyn Peake’s Gormenghast novels, The Iliad, and Paul Gallico’s Love of Seven Dolls. Classical ideas as well as the great desire to continue what Mervyn Peake had begun but not finished led him to delineate his own world. Hermann Hesse, Kafka and other writers convinced him there were ways to be fantastical without conforming to the generally accepted notions of fantasy. Over the next ten years he filled 23 journals with his pictures, definitions, ideas and histories of his world, the Half-Continent.

It was not until 2003 that a chance encounter with a children’s publisher gave him an opportunity to develop these ideas further. Learning of his journals, she bullied him into writing a story from his world. Cornish was sent away with the task of delivering 1,000 words the following week and each week thereafter. Abandoning all other paid work, he spent the next two years propped up with one small advance after the other as his publisher tried desperately to keep him from eating his furniture.

One thought on “Foundling by D.M. Cornish”