Light lives for his vampire family. Now he may die for it.

ESCAPE INTO AWARD-WINNING URBAN FANTASY… Light – rebel, lover, anti-hero – will be burnt at the stake in fourteen days. In a hidden, paranormal London, he’s been branded a traitor and terrorist Renegade – a Blood Lifer hunter of human slavers.

Liberty is a relentless interrogator. She’s been trained to hate Renegades. Yet when her life converges with Light’s, she’s enticed by the dark and glory of his world.

Light is catapulted into a nightmare of secret research, deadly enemies and perilous intrigue. Soon he’s in a race against time to transform into the true leader vital to save his family, home and love. But will he be able to judge predator from prey?

Light must make the ultimate choice: to hide in the shadows. Or walk into the light…

“Rosemary A Johns is one of fantasy’s greats. She’ll put you in mind of Anne Rice and leave you wanting more”–  Gothic Mom’s Reviews

“Take what you know about vampire romance and throw it away. Rosemary A Johns is not only a refreshing new voice in this genre, she excels it. Her vampires are edgy, titillating and enticing” – Rockchick Addiction Reviews

Don’t forget me…Sun entwined around me like a steel snake; her bite into my jugular was explosive rainbow end of days. I panted, squirming and gasping. Trapped in her embrace, my peepers rolled back, as I juddered. Then Sun was snogging me and I could taste my copper blood… Don’t forsake me…

I could feel the vibrations of Hartford’s anguished plea in his soulful song through every fevered atom. We curled around each other on the black cushions, which were piled on the lounge floor. Donovan was sprawled on the sofa, smoking wacky backy, serenaded by Hartford’s new routine for the club. But it was meant for him because one thing I knew..?

Hartford was singing to Donovan: the dead bloke he craved to resurrect.

I twisted Sun, splaying her over the cushions. She laughed in surprise. I’d forgotten how young she still was. ‘My turn.’

I bit but gently. The moment when my fangs slid through her ivory skin was divine. Her blood was like coming home. Her body was quivering… Don’t forget me… and we were snogging, both our bloods bonded as one… Don’t forsake me… our hearts beating united… Live for me…

‘Bloody down.’ I threw myself over Sun, shielding her. I couldn’t hear anything over the rat-rat-rat of gunshots. The sofa’s foam sprayed like snow.

Dark shapes, like black ghosts, were thronging through our flat. A dozen at least.

Hartford was huddled by the wall: he was riddled with bullets. His breathing was laboured; crimson was seeping down his white shirt.

Donovan had dived from the sofa and was stroking Hartford’s cheek, snarling at the bastard, who had his semiautomatic pressed to Hartford’s forehead.

I stood up, straightening my shoulders. As if with a collective mind, the black balaclava bastards turned their shooters to point at me. Apart from the one who had his trained on Hartford. ‘Reckon there’s been a bit of a mix up, gents. So why don’t you pack up and get your arses out of here. By the way, what type of Blood Lifer brings either a gun or a First Lifer to a barney?’

Other Books in Series 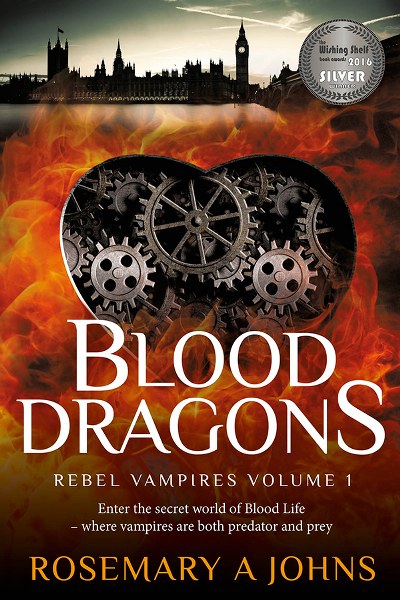 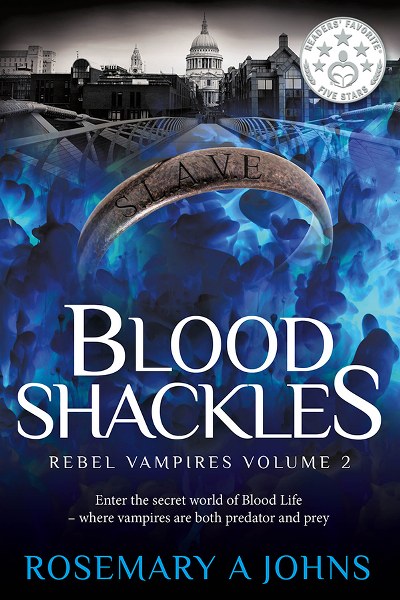 Rosemary A Johns is the author of the bestselling  Blood Dragons  and  Blood Shackles –  the compelling  Rebel Vampires  series. Blood Renegades is the thrilling third installment.

Rosemary A Johns is a music fanatic and a paranormal anti-hero addict who creates spellbinding worlds, thrilling action, gripping suspense and passionate romances, all uniquely told. She wrote her first fantasy novel at the age of ten, when she discovered the weird worlds inside her head were more exciting than double swimming. Since then she’s studied history at Oxford University, run a theatre company (her critically acclaimed plays have been described as “uncomfortable, unsettling and uneasily true to life”), and worked with disability charities.

When Rosemary’s not falling in love with the rebels fighting their way onto the page, she heads the Oxford writing group Dreaming Spires.