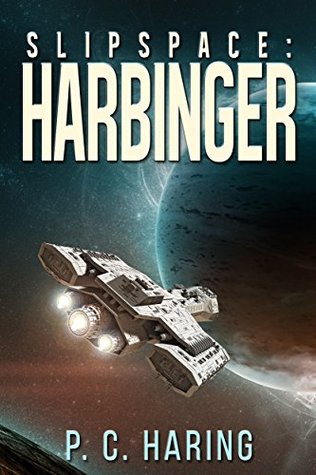 A fringe colony world has gone dark, and Captain Cody Amado and the crew of the ISPA’s newest battle cruiser, Mjöllnir, must respond and investigate. No one is prepared for the destruction that awaits them.

Agendas collide as the bonds of duty, loyalty, and family are tested, and the major governments position themselves to prepare for what is to come next. With interstellar tensions rising, the crew of the Mjöllnir race to discover the connection between the colony’s destruction, an alien society so reclusive it has only been rumored about, and an enemy that disappeared a decade prior.

Is this merely an isolated incident, or is this a harbinger of much darker things still to come?

Morning came too soon for the Amados, much to Nira’s chagrin. Together, she and Cody made their way through the endless corridors. With the Mjöllnir just a few minutes out from Artez, the decks were buzzing with activity as the crew prepared for as many contingencies as could be planned.

They exchanged a brief kiss before going their separate ways- Nira towards the Med-deck and Cody to OpCom as Cassie’s voice echoed through the ship’s public address system announcing their pending arrival and setting the ship at condition two. He stepped through the hatch and found the ship’s command center no exception to the activity about the rest of the ship. The traffic on deck paused to give the Captain room to move to his station and log in.

“Give me a sit-rep,” The Captain ordered.

Cassie stepped to the opposite side of the central station. She betrayed no anger or frustration. Any animosity she had towards him lay buried behind as much professionalism she could muster.

“We can’t find an exit aperture. According to navigational charts, we’re well within range of the outer guide-buoys, but there’s no sign of them. We’ve also tried to raise the gate on comms, but no luck.”

“Deploy a replacement buoy,” he spoke to Cassie. “We’ll have to make a blind exit. Hopefully it won’t be in the middle of an engagement.”

He paused and reviewed the data. “Still, best be prepared.”

He stepped away from the console and turned to the deck. “Sound General Quarters! Set condition one throughout the ship!”

The order relayed through the chain of command. The Mjöllnir’s klaxon rang out only seconds later and the already busy decks burst into further action. Two minutes later, Cassie turned from her console.

“All rail positions are manned and armed. Main cannons are charging. ECM is charging and calibrated full negative; frequency coverage at ninety seven percent. Replacement nav-com buoy has been deployed. ETA to Artez…,” she paused to check her watch. “Three minutes.”

“Captain, we’re close enough to pick up preliminary data,” the navigator reported. “Without the buoy, we’re without detail, but I’m detecting over one hundred separate energy signatures. The data is too obscure to plot an exit trajectory.”

The display in front of Cody updated, a wave of distortion sweeping out from center, erasing old information and leaving new data in its wake.

“There go my hopes of not walking into a fight,” Cody muttered. “Pilot, overshoot the combat area! Tear us an exit to normal space and double back!”

The deck rumbled as the ship tore itself into normal space. Without the aid of a functioning gate, the transition came with far more violence. The ship shuddered and bucked, throwing both Amados off balance, and a few crewmen to the deck. Cody and Melor exchanged looks of tepid relief. He noted that even as an emergency maneuver, one within the ship’s tolerances, the blind exit always carried dangerous risk.

Power transitioned to the Mjöllnir’s sub light engines as the pilots brought her about and proceeded on course at flank speed.

As they approached the edge of the zone, the first signs of debris floated past the ship. The pilot and navigator avoided it with ease but soon found the ship surrounded by hull fragments from broken fighters. This was no surprise as fighter wings always took high casualties.

“ECM to full, activate all fixed weapon positions and roll the Gryphons onto the tarmac,” Cassie ordered.

Cody continued to study the out-of-focus holograms on the central display. The objects still showed as general spheres, indicating the sensor’s inability to obtain a full resolution scan.

“Can we clear up this interference any time soon?” Cassie asked.

In response, Melor turned to a secondary console. “I’m trying, Commander. There are a lot of cross signals out there preventing us from getting a full resolution scan on the area.” She transferred a data module from one console to another. The device whirred to life as she accessed its programming. “However,” she muttered as she worked, “I have a couple of algorithms up my sleeve. I’m bringing them online right…”

At the same time, all screens and displays showing the battle zone refreshed to show its data at full resolution. Melor, Aler, and both Amados looked to the center and watched.

No one responded. Everyone’s eyes locked on the displays and the sensor returns. Op-Com fell silent save for the humming of the ship’s engines and the beeping of the computers. No one moved, as they stood locked in a trance of awe and horror. The Mjöllnir’s engines powered down as they arrived at the coordinates. What should have been a fully functional slipgate was little more than a field of burning hulk and slag.

“The station…it’s just gone,” Cassie said, to no one in particular.

After what seemed like an eternity, Melor turned back to her console. “Sensors are detecting no weapon signatures, no power signatures…”

“This isn’t a battle zone,” Cody stated. “It’s a graveyard.”

A fan of Science Fiction from an early age P.C. Haring has always been one of those who looked up at the night sky and wondered “what if…”

P.C. Haring made his debut as a writer and podcast novelist on 01/01/10 with Cybrosis. This production met with a strongly favorable response that propelled it to number four on the Podiobooks.com Top Ten list when it was re-launched there that October. His audio fiction can also be heard in Scott Sigler’s The Crypt: Book 1 — The Crew and in Philippa Ballantine’s Chronicles of the Order anthology. His contribution for Tales from the Archives, co-produced by Philippa Ballantine and Tee Morris, won him the 2012 Parsec Award for Best Short Story. This momentum propelled P.C. Haring into publishing Cybrosis as well as his latest project, Slipspace: Harbinger independently.

When he isn’t developing new projects for podcast and publication, P.C. Haring works as a corporate accountant in the Chicagoland area and as a husband to his beautiful wife.