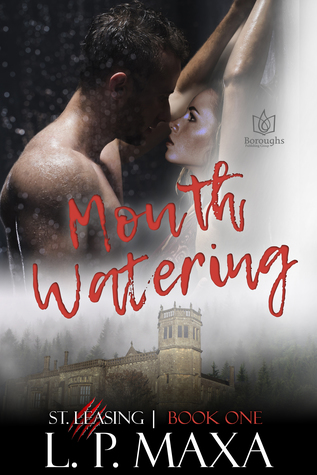 Looking to change her life, Corey Cooper moves across the country to a remote town in Colorado to become the new guidance counselor at St. Leasing, a prestigious all boys prep school. But soon she learns her attraction to the gorgeous head coach, Dominic Hardy, is more than the usual chemistry, and that her students are more than the typical randy teenage boys.

WAS WRITTEN IN HIS SOUL

Dominic Hardy loves his life at St. Leasing. As head coach, he’s fulfilled by his career, and in the small Colorado town outside the school’s gates, he has all the entertainment a man could desire. No complications, no attachments, life was good. Then Corey Cooper comes to St. Leasing and Dominic’s instincts kick in – she is his, and that’s for life. Throw in a troubled teen, a tyrannical parent, and a mysterious disappearance, and all of a sudden everything at St. Leasing has become a matter of life or death for his kind.

His truck pulled in behind her SUV in the driveway and he was out of his vehicle opening her car door before she’d even turned off her engine. Eager, wasn’t he? He held his arm out, and she smiled as she hooked her hand around his large bicep. “How chivalrous Coach Hardy.”

When they reached the front porch she turned toward him with what she hoped was her sultriest grin, kind of innocent with a hint of fire. “Thanks for everything today, Dominic. The directions. The drinks. The companionship. I’m so glad that you were the first person I met here.” He hadn’t seemed to like the word friend when she’d used it back at the bar, and she’d bet the word companionship was setting his teeth on edge right about now.

“Seems like I was at the right place at the right time. It was a pleasure meeting you Corey Cooper.” He leaned in with his whole body but went for her cheek instead of her lips.

“Mmmm, you smell amazing.” She all but purred. She was playing the game, but in truth, he really did smell fantastic. “What kind of cologne are you wearing?”

He moved away a fraction of an inch and kissed her other cheek softly. “I’m not wearing any cologne. But I’m glad you think I smell good considering I didn’t have time to shower after practice.”

She laughed, “Really? You smell mouthwatering like all my favorite scents rolled into one. I noticed it earlier today. I smelled you before you even said a word to me.” And she had, it was like he had filled the air before she’d known he was behind her.

His body was close to hers, but still not touching. Corey knew what his game was, leaving it up to her, letting her make the first move. Did he think he was clever? A visionary? And hardly the first guy to use that tactic. But okay Dominic Hardy, you win this one. When he went to pull away again, she grabbed his shirt in her hands and fused their mouths together. She felt herself immediately melt into him. The kiss was the most perfect first kiss she’d ever had.

His lips were soft but demanding and when he fisted his hands in her hair, tugging lightly, she gave in. She opened for him and let his tongue invade her mouth. God this was amazing. A perfect kiss mixed with his yummy scent, she could hardly stand it. Yeah, life at St. Leasing was well on its way to wonderful.

L.P. Maxa lives in Austin, Texas with her husband, daughter, 3 rescue dogs, 1 cat – the fish died – and one bunny who doesn’t seem to like them. She loves reading romance novels as much as she loves writing them. She says, inspiration can come from anywhere: a song lyric, a quote, a weekend with friends. The tiniest things can spark amazing stories. She loves to hear from readers.