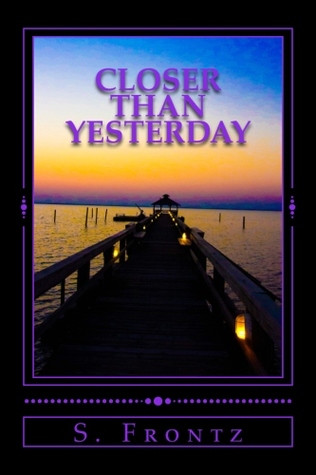 Samantha Patrick’s cousin Sarah has lived with an abusive husband for thirty years. After a brutal attack, she finally finds the courage to leave. Sarah goes to Land’s End looking for safety and comfort with her family on this small, idyllic island but the horror is not over yet. Someone is stalking Sarah. Is it the abusive husband or someone else? Will Land’s End be the place where Sarah finds new life, or it will be where it ends?

Leslie Jennings carefully folded the last of her husband’s shirts and zipped up the suitcase.  She picked it up, struggling as she did.  Leslie was only 5’2, and very slim.  The suitcase was almost as big as she.  Leslie managed to get it to the floor, where she raised the handle and rolled it to the top of the stairs.  Now she had to get it downstairs without making too much noise.  Carter would accuse her of trying to destroy his Louis Vuitton luggage.   After ten minutes of pulling the luggage down one stair at a time, Leslie finally rolled it to the front door.  She ran quickly back upstairs and grabbed his garment bag.  She had already packed this and she hurried back downstairs.

She was waiting by the luggage when Carter came downstairs, his briefcase hanging from his shoulder.  He was dressed in a sharp gray suit, white dress shirt, and patterned gray tie.  Leslie studied him while he glanced through his phone.   Carter was of average height, with graying brown hair and eyes.  He had sharp features and rarely smiled.  His only pleasure was making a sale.  He owned a real estate company and it was very successful.  They had been married for thirty years and they had no children.

Carter didn’t like kids, so they didn’t have any. He glanced up from his phone and gave Leslie the once-over.  She was wearing her scrubs, ready to go to work at the hospital after she dropped Carter off at the airport.  She worked the seven p.m. to seven a.m. shift when he was gone on business trips.  He thought if she worked at night, she wouldn’t be out doing anything else. She didn’t know why it mattered if she was seeing anyone or not.

He was not the affectionate type and most of the time he acted like he hated Leslie. It wasn’t an issue anyway, Leslie didn’t go anywhere outside of work and her grandmother’s house. The only people she talked to were her co-workers and her grandmother Jody.  Carter didn’t allow her to socialize with anyone other than someone he approved, and he didn’t approve of anyone. “Looks like you’re ready to go.  Is this all my stuff?”

Carter waved his hand over the luggage. Leslie nodded.  “Yes, that’s it.  I packed everything you had on the list.” Carter picked up his garment bag and gestured for Leslie to get his suitcase.  She picked it up and carried it to the car waiting right outside the door in their driveway that curved around the front of the house.  She couldn’t roll it; Carter would get upset.  She managed to get it in the trunk of his Mercedes.   He got in the driver’s side and Leslie in the passenger side.  Silently they drove out of the subdivision.

Carter finally spoke when they had gotten to the highway. “Tell me your schedule,” he commanded. “After I drop you off, I’m going home to get my car.  I’ll put yours in the garage.  Then, I’m going to Jody’s to fix her supper, then I’m off to work.  I work the night shift.  I get off at seven a.m.  I’ll go back to Jody’s and fix her breakfast, then home for a few hours of sleep.  Then I’ll get up and complete the to-do list that you made.”

Carter nodded in satisfaction.  “Very good.  I approve.” Leslie stared out the window.  How she would love to hit him right in his arrogant face.

Well, that was all going to change tonight.  When she finally made it to work tonight, she was going to leave her cell there.  Carter had a tracking app on it.  She had already spoken to her supervisor and he had promised that he would help Leslie in any way that he could.

Leslie was going to get on a Greyhound bus tonight and start her journey away from Carter.  She had been saving money for months, a little at a time and squirreling it away at Jody’s.  She would go get the money and see Jody one more time. After that, she was going to leave her car at the bus terminal and take the bus to Memphis, rest, get on another bus to New Orleans, and slowly make her way around the southeast coast to a little island town in North Carolina called Land’s End.

Leslie had heard Jody talk about the little town for years.  Leslie’s first cousin, Samantha, lived there with her husband, Andy, who was also the sheriff of the town.  Samantha had never contacted Jody, but through the internet, Leslie had been able to track them down for Jody. Even though she knew where they were, Jody wouldn’t contact her.  She was waiting for Samantha to come to her. She knew what Samantha had been through, and Jody didn’t want to bring back sad memories to Samantha until she was ready.  Leslie thought it was a good a place as any to start over.  Maybe she and Samantha could become friends. Carter didn’t know about Samantha.  Jody had quite a bit of money and owned a large historical home.

Carter thought that Leslie was going to inherit all of it.  He didn’t mind if Leslie took care of Jody, in fact, he insisted that she go there before and after work.  If he knew that there was someone else to split the inheritance with, he would be very angry with Leslie, even though it wasn’t her fault. Leslie was tired of being the recipient of his anger.  When they first married, she wasn’t aware of his violent temper or that he was a control freak.  She thought that the reason he watched her every move and told her what to wear, who to be friends with, etc., was because he cared about her.

Her parents had died when Leslie was ten. Her grandmother had taken her in and raised her.  Leslie loved Jody, but she had missed her parents, especially her father terribly. That was one of the things that had attracted her to Carter.  He was several years older than she was.  He owned his own business, home and he was very settled and mature for a man in his early thirties.

The first time she did something he didn’t approve of they had been married for a year. He had backhanded her and bruised her cheek so badly that she had to wear pancake makeup for over a week.  It took her while to figure out what set him off, but over the years she had managed to get into his routine and kept herself from getting hurt.

They were getting close to the airport and Carter started droning out instructions to her.  She could recite what he was telling her in her sleep; but she answered him in the way he liked for her to respond. No sense in getting him upset.  It was so close for time for her to leave; she could deal with him for a few more minutes. He pulled up in front of the doors in the unloading zone.  Leslie got out and waited for him to open the trunk.  She handed him his garment bag, then pulled his suitcase out.  He took the handle from her. “I’ve got it from here.  Get my car home and put away.  I will see you in a week.”

Without any further words, he went inside the terminal and Leslie got in to drive his car home. He had always told her that he would kill her if she left.  When she had celebrated her 55th birthday in January, Leslie had known that this year was the year she had to leave.  Living like this was killing her, and she deserved a chance for happiness sometime in her life.

S.W. Frontz is the author of the Land’s End Series, which includes: When the Morning Comes, Don’t Look Back, and Closer Than Yesterday.  S.W. is a native of Charlotte, NC but was raised in East Tennessee, where she still resides with her husband, Rusty, of 21 years, and their furbaby, Mandy.

S.W plans on continuing the Land’s End Series, at least for a few more books.  Book four is in the first draft stage.

S.W. is a nominee for the 2017 Top Female Author and a member of the Southeastern Writer’s Association.

5 signed paperback copies of Closer Than Yesterday – 1 $10 amazon gift card will be hidden in one of those five copies (US only) and maybe another surprise or two.