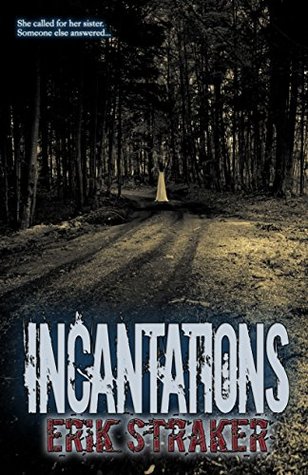 She called for her sister…
Someone else answered.
Sisters Angela and Lillian Tremblay return to Summerhaven, New Hampshire, after sixteen years away, ready to face the secrets and half-forgotten memories from their childhood.

One winter’s day, Angela finds Lillian dead in the basement of their family home. The police are convinced it’s a suicide, but the town’s residents know better. The house once belonged to an ancient woman who killed children and bathed in their blood. A woman known as the Summerhaven Witch.

When a local woman with psychic abilities connects Angela’s past to her present, the truth threatens to push Angela over the edge.

Memories can scar. Secrets can kill.

The only thing left is for Angela to speak the words that will allow her to talk with the dead.

She must speak the incantations.

I received this eBook from the author in exchange for an honest review.

All I can say is wow. Wow, this was totally worth the sleepless night. It wasn’t really a book that I could put down if I wanted to. It begged me to finish it.

Every character, even minor characters, were incredibly well developed and complex. Each character had its own story and reason for being in the main story itself. But for me, it was the psychic Viviana, Angela and the Summerhaven Witch that stood out the most.

You know those stories and movies where the house is the culprit, this was very similar although it was the ghost of the witch who was causing it. The house just seemed to suck up the bad energy and hold it within its walls.

When I think of the witch, I think of “The Conjuring” and the witch in that. Both were equally terrifying and their living energy and dead energy they left in the two houses.
But the Summerhaven Witch was terrifying in her ability to make people do things they normally wouldn’t like Lillian committing suicide.

“The sound of footsteps came to her, sharp and clear, from upstairs. She moved to the left enough to see up the stairs and through the rungs of the banister. It was dark, but not too dark to see dirty jeans and work boots walk out of the shadows and come into view.

Angela’s heart jumped to her throat and lodged there, choking off any chance of a scream or a cry of surprise. Those jeans. Those work boots. They didn’t belong to just any guy. They belonged to a man who had been dead for sixteen years.

Father? Angela thought incoherently. Oh no, is it Father?” (page 77)

Angela was definitely the star of the show. She was tough and she didn’t let the witch or house win. She called for her sister and faced down what answered instead. Also, creepy basements. *Shudder*.

My only problem was the ending was strange. It didn’t really fit with the rest of the story itself. It did conclude that the story was written in a blog post format and a tale being told, but it just didn’t fit in with the energy of the story.

But either way, I am looking forward to reading more by Erik Straker in the future!

Erik Straker was born in South Carolina in 1977. A rich Southern history full of ghosts and haunts has served as inspiration ever since.

He is the author of the dark poetry collection Fairy Tale Destruction as well as the novelette, Incantations. He writes mostly in the horror and dark fantasy genres.

Erik went to film school for a number of years and applies what he learned about film to his writing, using a predominantly visual style. Coming from a background of film and art, Erik has other projects in the works besides just his future novels. Graphic novels, short films, music albums and other artistic endeavors are completely up for grabs.

His dismal world views are ever-present throughout his art and writing. Despite this, he is a fairly normal guy who loves comedy as much as horror and is not at all “Goth” or “Emo.”

Writing is his full-time love, and he works to perfect his craft every day. When not writing, he enjoys comic books, movies, music, and family time.